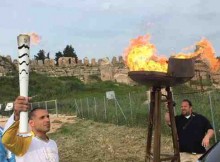 Feature
The Olympic flame gets its Twitter profile. Since the ceremony at the Temple of Hera in Olympia on Thursday (21 April), the flame has been providing followers of
Read More
Copyright © 2021 RMN Digital.
Web Property of RMN Company.